Sir Ian Blair what next

I think its a good idea to double up in trouble areas. Everyone no matter how much tax they pay deserves protection.

Commit your resources to where they are most needed.
Top

And the wild card...


Met chief is 'hardest police job'
Mr Bratton has in the past gone on patrol with London police officers
The Metropolitan Police Commissioner's job is probably the most difficult police role in the world, the head of the Los Angeles police force has said. 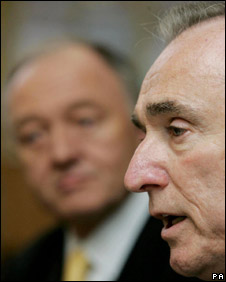 Bill Bratton, a contender to replace Sir Ian Blair, said terrorism, knife crime and politics made the role even tougher than its equivalents in the US.

The commissioner has to be "a strategist, a tightrope walker and an optimist," he told the Sun newspaper.

Mr Bratton, 61, said he was keeping his "options open" about the job.

He told the newspaper: "I have been doing this for 40 years. I have worked in two of the world's most significant cities - New York and Los Angeles - and I can safely say that, today, the Met job is probably the most challenging."

The veteran officer pointed to the combination of London being one of the world's major terrorist targets, the fact that it has been gripped with knife-crime concerns and that its police force is at the heart of a power struggle between local national government.

Mr Bratton has become famous for his "zero-tolerance" approach to crime and is said to be a favourite of London Mayor Boris Johnson, the Sun reported.

Mr Bratton said: "In some respects you need a multi-faceted individual who can become a combination of a cheerleader, a strategist, a tightrope walker and an optimist."

Asked about his chances for taking on the commissioner's role, Mr Bratton said: "I don't think there's any shortage of home-grown talent in the UK and I've got a great job here - but I always keep my options open."

After Sir Ian Blair's sound and fury over the failure of the Metropolitan Police Authority to publish the report into the Scotland Yard contracts affair, there was a curious development late last night.
THE TIMES
Sir Ian and his lawyers had demanded that the report - written by Sir Ronnie Flanagan - be published in full because it completely exonerated him of any wrongdoing in the award of contracts to his friend Andy Miller.

But the MPA hit back at 11.18pm with a statement saying it did not accept the full findings of Sir Ronnie's report.

The MPA statement said:"The Authority now wishes it to be made explicit that its decision, as recorded in the minutes of its exempt meeting, does not amount to an exoneration of Sir Ian Blair's conduct. In particular the sub committee did not accept the third conclusion reached by Sir Ronnie Flanagan that:
'There is no basis upon which police misconduct proceedings could be recommended against anyone involved in this investigation. It should be noted that this conclusion has nothing whatever to do with Sir Ian Blair’s decision to retire. It would apply with equal force, should he still be serving.'"

The report may yet be published - possibly in redacted form - but the row is certain to rumble on.
Top

Boris Johnson may well be supportive of PCSOs, but in what way? He may want to promote one side of their role and decrease another. If this doesn't suit well with each particular PCSO, then it ain't looking too good!

Boris was briefly a hated figure here in Liverpool after his (pretty much justified) attack on the "self-pity city" or whatever the comment was.
Power of arrest for PCSOs for 'as and when' - s24a PACE & common law (i.e. BoP) using s3 CLA 1967

I'm a PCSO, I will WATCH you get your head kicked in (as per force policy)
Top
Post Reply Previous topicNext topic
20 posts