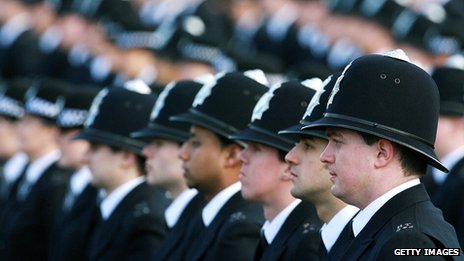 Police forces across England and Wales should merge to create a more up-to-date and efficient service, senior police officers have said.

Chief Constable Stephen House, head of the new national force for Scotland, said it was "inevitable" the current 43 force system would have to restructure.

Sir Hugh Orde, head of Acpo, the forum for police chiefs, said the idea was gaining support among senior officers.

The Home Office said police forces could work together without merging.

However, Mr House said the current policing system and structure "goes back a long, long time" and there is a need for a more modern approach.

"If you were taking a blank sheet to policing in England and Wales, would you have it with 40-plus forces? Highly unlikely - it doesn't make sense," he told BBC Radio 4's File on 4 programme.

"You wouldn't design it the way it is, you would take a different approach and that would probably be a regional approach.

"Everything drives that way, technology, criminal behaviour... I think the economy drives you that way."

A merger between the 43 forces in England and Wales was raised back in 2005 in a report published by Her Majesty's Inspectorate of Constabularies, titled Closing the Gap. It proposed local forces should merge to form regionally based forces, but the plan was abandoned.

Since then support has grown among senior officers for a move towards a smaller number of much bigger regional police forces, said Sir Hugh, president of the Association of Chief Police Officers (Acpo).

"If Scotland can get their act together and create a smaller number of forces then why can't we?" he told File on 4.

"The answer is self-evident... there has been, historically, no desire to do that in government."

Scotland's Justice Secretary Kenny MacAskill told File on 4 that transforming the existing eight Scottish constabularies into one national force in times of austerity has several advantages - the Scottish government believes the creation of a national force could save £1.66bn over 15 years.

"The alternative to what we're doing is to go down the route south of the border, to lose 16,000 officers - to attack the terms and conditions of those officers who serve, to bring in police and crime commissioners at great cost that politicise, not de-politicise policing," he said.

"We're not going that way. We're going to invest in the 'bobby on the beat' and we're going to maintain that visible police presence."

On 15 November voters in all parts of England and Wales outside London will elect a person to oversee each police force.

The new commissioners will replace police authorities in 41 areas, excluding London's two forces where the role is already performed by Mayor Boris Johnson.

Some experts predict this move, which is part of the government's localism agenda, will entrench the 43 force structure in England and Wales which many senior officers believe is no longer fit for purpose.

A spokesman for the Home Office told the BBC police forces had a duty to collaborate with each other and initiatives like the formation of the new National Police Air Service and the National Crime Agency would show individual forces can work together without having to merge.

"We believe police should be accountable to the communities they serve," he said, adding "under police and crime commissioners, the public will finally have a seat at the table when key decisions are made about crime and policing in their area."

Can you see this working?