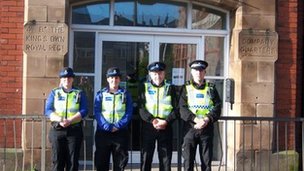 Police in a south Cumbrian town are to operate from a new base.

The team will move from its old base in Millom to the Drill Hall in Dalton on 6 November.

The old police station was identified as not fit for purpose and is being put up for sale as part of the review into the police estate in Cumbria.

A police spokesman said: "There will be no change to the policing team or the service we deliver to the local community."

Supt Mark Pannone who is in charge of policing across South Cumbria said: "Policing teams now have access to technology which means officers and PCSOs are spending more time out and about in the community rather than in the office so the building was underused and very expensive to maintain.

"Our new base is a hub in the community and will ensure we maintain a high-visibility presence in the town centre."