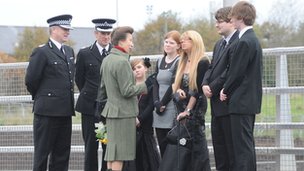 The widow of a policeman who died when a Cumbria bridge collapsed during flooding has met the Princess Royal.

PC Bill Barker was checking for people in the water when Northside Bridge in Workington collapsed in November 2009.

On a visit to Cumbria, Princess Anne cut the ribbon across the new Northside Bridge and met PC Barker's widow Hazel.

She also spoke to people who were affected by the 2009 floods when unprecedented rainfall caused rivers to burst their banks.

The princess opened the 152-metre three-span structure by unveiling a plaque in honour of PC Barker.

'Lasting legacy'
She was joined by the Lord-Lieutenant of Cumbria Sir James Cropper and pupils from Northside Primary School.

Princess Anne met Mrs Barker and her four children next to a memorial to her late husband - a stone replica of his badge.

Speaking about her husband, Mrs Barker said: "His only thought was to preserve the lives of those he served… an amazing husband, an incredibly devoted dad, a dedicated police officer and a loyal public servant. My focus is now on the children." 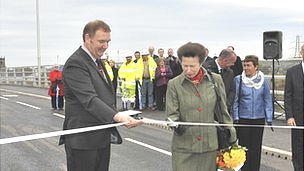 The opening of Northside Bridge marks the completion of Cumbria County Council's flood recovery programme in Workington which has included rebuilding five bridges across the town's River Derwent.

The bridge's concrete piers are clad in recovered sandstone from the original bridge.

"Today's events were tinged with a note of sadness at the memory of PC Bill Barker, but his family were incredibly brave to attend and they can be very proud of the lasting legacy to Bill which is in the bridge."
Top
Post Reply Previous topicNext topic
1 post • Page 1 of 1