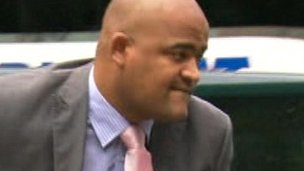 A former Metropolitan Police detective constable who specialised in rape cases has been sentenced to 16 months in prison for faking police records.

Ryan Coleman-Farrow, 30, from East Sussex, admitted 13 counts of misconduct in a public office, at Southwark Crown Court in September.

He failed to investigate rape and sexual assault cases and falsified entries on a police computer system.

The 13 cases included a 96-year-old woman who witnesses said had been raped, a 49-year-old severely brain damaged care home resident who alleged she was raped by a member of staff, two 15-year-old girls, a 14-year-old schoolboy, and a vulnerable woman patient at a specialist unit for sexual abuse.

'Victims vulnerable'
The offences he should have investigated were committed between January 2007 and September 2010, while he was an officer at Kingston-upon-Thames, south-west London, working for Scotland Yard's specialist Sapphire unit.

In total 32 cases had to be reviewed by the Met, which sacked the officer in April 2011. The force said all the cases involved had been thoroughly reviewed.

The prosecution said Coleman-Farrow, of St Leonards-on-Sea, Hastings, had falsified records, witness statements, did not send exhibits for analysis and falsified advice from the CPS. In one case he claimed that a rape victim had dropped charges.

Sentencing, Judge Alistair McCreath said: "In all 13 cases you failed to take steps that were appropriate and necessary for a full and proper investigation of each case, whether by failing to take statements or to gather exhibits or to pass material on to other agencies for further investigation or analysis.

"All of these people had made complaints of sexual abuse and many of them were particularly vulnerable.

'Not properly investigated'
"Thus the complainants did not have their cases taken to court. Perhaps some of them might never have got that far.

"But whether those cases did get to court or not, those who were thought to be victims of sexual abuse simply did not have their cases properly investigated."

Defence solicitor Richard Atchley said the officer had been under some stress at the time as he had been suffering from skin cancer, had gone through a divorce and had too great a workload.

Mr Atchley said: "This was not corruption and not even laziness. He was covering up failures that happened six years into a job before which he had been a very effective officer.

"These failures were due to poor health over part of three years. His major failing was in not sharing it with anyone else and in particular those he worked for."

But Coleman-Farrow himself said that there was no excuse and he blamed nobody but himself.

'Lied and misled'
Deborah Glass, deputy chairwoman of the Independent Police Complaints Commission (IPCC), said he was a "rogue officer who deceived his colleagues and concocted evidence to cover his tracks".

She added: "Our investigation did not reveal systemic or serious supervisory failings.

"Coleman-Farrow admitted during his criminal interviews with the IPCC that in some cases he actively lied and misled his supervisors to cover up his shortcomings and that they would have had no reason to question the validity of the evidence he produced."

In the case of the 96-year-old woman who was allegedly raped by her own son, the sacked officer did not submit forensic evidence and falsely claimed to have obtained witness statements. The woman died last February.

Following allegations of abuse of a 14-year-old schoolboy by a classmate, the officer failed to collect paperwork and take statements from a potential witness and the class teacher.

"People should have confidence in reporting rape and it will be investigated thoroughly. Hopefully we can put this down to an abhorrent individual."
Top
Post Reply Previous topicNext topic
1 post • Page 1 of 1