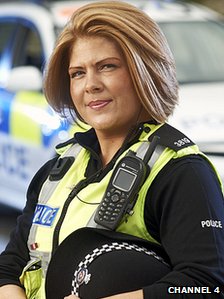 A police officer has been disciplined after her force received complaints about TV footage which showed her putting on lip gloss while on duty.

PC Claire van Deurs Goss was shown applying gloss while at the wheel of a police car in Monday's episode of Channel 4's 999: What's Your Emergency.

A Lancashire Police spokeswoman said the force had taken "management action" after receiving over 50 complaints.

She added that the PC's conduct had been "below expectations".

During the programme, Mrs van Deurs Goss was shown applying lip gloss and said "lipstick is more effective than a Taser" when dealing with some dangerous situations.

The police spokeswoman said the basis of the complaints and Mrs van Deurs Goss' disciplinary action was that she had been putting on the make-up while in charge of a police vehicle.

She said the force expected "all our officers and staff to uphold the law and the standards which we strive for in our day to day duties".

"On this occasion, whether it was a momentary lapse of judgement or not, the officer fell below these expectations and will receive management action.

"Whilst we are disappointed in what we saw, this should be viewed in the context of the very positive and brave work our police officers undertake every day.

"The majority do their job with good humour and professionalism and the positive comments and feedback far outweigh the negative ones we have received."

Mrs van Deurs Goss' actions were shown as part of the sixth episode of the Channel 4 programme, which documents work of the emergency services in Blackpool.
Top
Post Reply Previous topicNext topic
1 post • Page 1 of 1